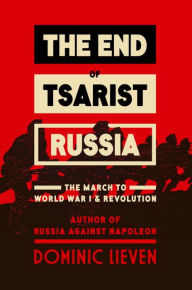 As much as anything, World War I turned on the fate of Ukraine.* To an English-speaking audience, this statement will seem final confirmation that most professors are crazy. No Allied soldier believed he was risking his life over Ukraine. Few of them had heard of the place. The same was true of German soldiers in 1914. In connection with the war’s centenary, a flood of books will be published in English. Very few will mention Ukraine. Most of these books will be about the experiences of British, Dominion, and American soldiers and civilians during the war. Many others will debate the impact of the war on the society and culture of the English-speaking world. Ukraine’s fate had nothing to do with any of this.

Nevertheless, my statement is not as far-fetched as it seems. Without Ukraine’s population, industry, and agriculture, early-twentieth-century Russia would have ceased to be a great power. If Russia ceased to be a great power, then there was every probability that Germany would dominate Europe. The Russian Revolution of 1917 temporarily shattered the Russian state, economy, and empire. Russia did for a time cease to be a great power. A key element in this was the emergence of an independent Ukraine. In March 1918, the Germans and the Russians signed a peace treaty at Brest-Litovsk that ended World War I on the eastern front. In this treaty, Russia was forced to recognize Ukraine as an independent country in principle and a German satellite in practice. Had the Treaty of Brest-Litovsk survived, Germany would have won World War I. To win the war, Germany did not need outright victory on the western front. A draw in the west combined with the eclipse of the Russian Empire and German domination of east-central Europe would have sufficed to ensure Berlin’s hegemony over the Continent. Instead, Allied victory on the western front resulted in the collapse of German hopes for empire in the east. As part of the armistice that ended World War I, Germany had to renounce the Treaty of Brest-Litovsk and abandon its conquests in eastern Europe. Soviet Russia moved back into the vacuum, reconquering Ukraine and re-creating the basis for a Russian Empire, albeit in communist form.

This underlines a basic point about World War I: contrary to the near-universal assumption in the English-speaking world, the war was first and foremost an eastern European conflict. Its immediate origins lay in the murder of the Austrian heir at Sarajevo in southeastern Europe. The assassination of Franz Ferdinand on June 28, 1914, led to a confrontation between Austria and Russia, eastern Europe’s two great empires. France and Britain were drawn into what started as a conflict in eastern Europe above all because of fears for their own security: the victory of the Austro-German alliance over Russia would tilt the European balance of power decisively toward Berlin and Vienna. It is true that victory in World War I was achieved on the western front by the efforts of the French, British, and American armies. But the peace of 1918 was mostly lost in eastern Europe. The great irony of World War I was that a conflict which began more than anything else as a struggle between the Germanic powers and Russia to dominate east-central Europe ended in the defeat of both sides. The dissolution of the Austrian Empire into a number of small states incapable of defending themselves left a geopolitical hole in east-central Europe. Worse still, the Versailles order was constructed on the basis of both Germany’s and Russia’s defeat and without concern for their interests or viewpoints. Because Germany and Russia were potentially the most powerful states in Europe, the Versailles settlement was inevitably therefore very fragile. It was no coincidence that World War II also began in eastern Europe, with the invasion of Poland, one of the key creations of Versailles, by its German and Russian neighbors in September 1939. After a generation’s truce, World War I in many ways truly ended when the Soviet army took Berlin in May 1945.

The Cambridge History of Russia