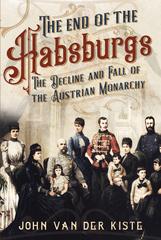 In 1806, the Holy Roman Empire ceased to exist as Francis II proclaimed himself Emperor of Austria. The Habsburg empire came to an end 112 years later after defeat in the First World War.

The Austrian monarchy, later the Austro-Hungarian monarchy, had survived several tribulations. During the year of revolutions in 1848, the much-loved but incompetent Emperor Ferdinand – a victim of chronic inbreeding – abdicated in favour of his young nephew Francis Joseph.

His reign of almost 68 years was marked by defeat in wars with France, Italy and Prussia, family tragedies and scandals, including the appointment of his brother Maximilian as Emperor of Mexico and subsequent execution, the suicide of his son Crown Prince Rudolf, and the assassinations of his wife Empress Elizabeth and nephew Francis Ferdinand.

His death in 1916 was followed by the succession of his great-nephew Charles who was forced to abdicate in 1918 and died after two unsuccessful attempts to regain the throne of Hungary; however, his eldest son Otto retained a major presence as head of the family and Member of the European Parliament for twenty years.

Beautifully illustrated, The End of the Habsburgs: The Decline and Fall of the Austrian Monarchy looks at the last century of the Habsburgs, from the Napoleonic era and the nineteenth century to the fall of the European empires, the age of the dictators and post-war Europe.

Introduction
1 Francis and Ferdinand
2 A young man of great promise
3 All power stays in my hands
4 The smile of an angelic sphinx
5 Death at Mayerling
6 Death at Geneva
7 He no longer understands the times
8 A higher power has restored the old order
9 Then it will be the end
10 I renounce all participation in the affairs of state
11 An eminently lovable if weak man
12 The imperial survivors
Endnotes
Bibliography
Index.