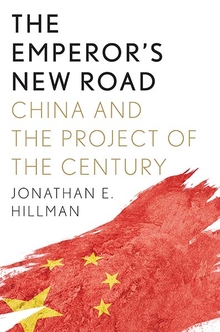 The emperor's new road
China and the project of the century

China’s Belt and Road Initiative is the world’s most ambitious and misunderstood geoeconomic vision. To carry out President Xi Jinping’s flagship foreign-policy effort, China promises to spend over one trillion dollars for new ports, railways, fiber-optic cables, power plants, and other connections. The plan touches more than one hundred and thirty countries and has expanded into the Arctic, cyberspace, and even outer space. Beijing says that it is promoting global development, but Washington warns that it is charting a path to global dominance.

Taking readers on a journey to China’s projects in Asia, Europe, and Africa, Jonathan E. Hillman reveals how this grand vision is unfolding. As China pushes beyond its borders and deep into dangerous territory, it is repeating the mistakes of the great powers that came before it, Hillman argues. If China succeeds, it will remake the world and place itself at the center of everything. But Xi may be overreaching: all roads do not yet lead to Beijing.