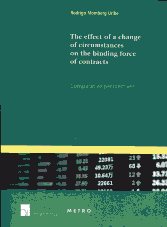 This book studies the situation where unexpected circumstances render the performance of a contract much more difficult or onerous and those which frustrate the purpose of the transaction.

The complexity of modern contractual relationships and, in general, of the social and economic environment, requires similar weight to be given to values other than the classical values of freedom, security and certainty. Cooperation, solidarity and flexibility have gained importance. In this context, the recognition of a change of circumstances as a remedy for the affected party may be considered as another aspect of the renewed importance of justice and fairness as a counterbalance to the general principle of freedom of contract. In particular, the affected party is entitled to rely on a proper set of remedies directed at the restoration of the agreement until the limit of an adequate sacrifice for the debtor, which includes the duty to renegotiate and in the case of the renegotiations failing, the revision of the contract by the courts. Thus, the contract may be considered to be a union of balanced interests, an instrument of loyal cooperation and a result of the mutual confidence between the parties.

The study includes a comparative analysis of European and Latin American jurisdictions as well as American contract law. In addition to national jurisdictions, it is also examined how modern model codes or restatements of international contract law deal with this problem. Because of its broad comparative analysis, this book is a useful tool to national and regional legislators as well as to judges and parties involved in cases in which a supervening and unforeseen change of circumstances has severely altered the performance of the contract.