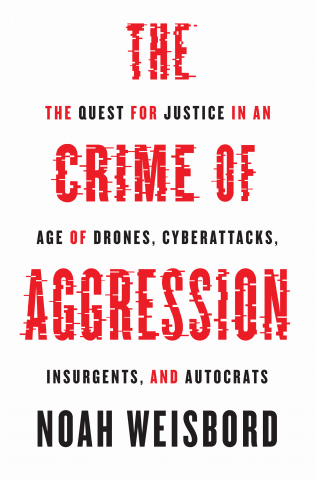 The crime of aggression
the quest for justice in an age of drones, cyberattacks, insurgents, and autocrats

On July 17, 2018, starting an unjust war became a prosecutable international crime alongside genocide, crimes against humanity, and war crimes. Instead of collective state responsibility, our leaders are now personally subject to indictment for crimes of aggression, from invasions and preemptions to drone strikes and cyberattacks. The Crime of Aggression is Noah Weisbord’s riveting insider’s account of the high-stakes legal fight to enact this historic legislation and hold politicians accountable for the wars they start.

Weisbord, a key drafter of the law for the International Criminal Court, takes readers behind the scenes of one of the most consequential legal dramas in modern international diplomacy. Drawing on in-depth interviews and his own invaluable insights, he sheds critical light on the motivations of the prosecutors, diplomats, and military strategists who championed the fledgling prohibition on unjust war—and those who tried to sink it. He untangles the complex history behind the measure, tracing how the crime of aggression was born at the Nuremberg trials only to fall dormant during the Cold War, and he draws lessons from such pivotal events as the collapse of the League of Nations, the rise of the United Nations, September 11, and the war on terror.

The power to try leaders for unjust war holds untold promise for the international order, but also great risk. In this incisive and vitally important book, Weisbord explains how judges in such cases can balance the imperatives of justice and peace, and how the fair prosecution of aggression can humanize modern statecraft.