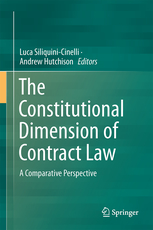 The constitutional dimension of contract Law
a comparative perspective

One of the hallmarks of the present era is the discourse surrounding Human Rights and the need for the law to recognise them. Various national and supranational human rights instruments have been developed and implemented in order to transition society away from atrocity and callousness toward a more just and inclusive future. In some countries this is done by means of an overarching constitution, while in others international conventions or ordinary legislation hold sway.
Contract law plays a pivotal role in this context. According to many, this is done through the much-debated ‘civilising mission’ of the contract, a notion which itself constitutes the canon of the Western liberal principle of ‘civilised economy’. The movement away from the belief in the absolute freedom of contract, which reached its zenith in the nineteenth century, to the principles of fairness and justice that underpin contract law today, is often deemed to be a testament to this civilising influence.
Delving into the interplay between human rights policies, constitutional law, and contract law from both theoretical and practical perspectives, this first volume of a two-book collection offers a totally new reappraisal of the subject by gathering a collection of essays written by contract law scholars from Europe, South Africa, Canada, and Australia. Instead of providing the reader with a sterile compilation of positivistic norms and policies on the impact of fundamental rights and constitutional law issues on contract law’s development, the authors build on their personal experience to analyse specific topics related to contracting that include a constitutional dimension. The book fills an important void in comparative law scholarship and in so doing represents the starting point for further debate on the subject.

Is All Fair in War Against Unhealthy and Unsustainable Lifestyles? The Right to Privacy vs. Modern Technology in Consumer Contracts
Luzak, Joasia

The Influence of Constitutional Law on French Contract Law: The Development of the Control of Proportionality in Case of an Infringement of a Fundamental Right by Contract
Seube, Jean-Baptiste

The Role of the General Principle of the Prohibition of Abuse of Rights in the Enforcement of Human Rights in Contract Law: A Belgian Law Perspective
Lenaerts, Annekatrien

Crystal and Mud Contracts: The Theory of Contract and the Ontology of Values
Decolonising South African Contract Law: An Argument for Synthesis
Hutchison, Andrew

Reflections on the Pactum in the Public and Private Spheres
Siliquini-Cinelli, Luca