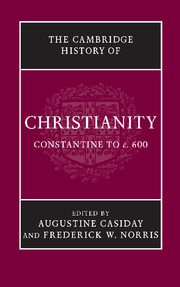 The Cambridge History of Christianity
Vol.2: Constantine to c.600

This volume in the Cambridge History of Christianity presents the 'Golden Age' of patristic Christianity. After episodes of persecution by the Roman government, Christianity emerged as a licit religion enjoying imperial patronage and eventually became the favoured religion of the empire. The articles in this volume discuss the rapid transformation of Christianity during late antiquity, giving specific consideration to artistic, social, literary, philosophical, political, inter-religious and cultural aspects. The volume moves away from simple dichotomies and reductive schematizations (e.g., 'heresy v. orthodoxy') toward an inclusive description of the diverse practices and theories that made up Christianity at this time. Whilst proportional attention is given to the emergence of the Great Church within the Roman Empire, other topics are treated as well - such as the development of Christian communities outside the empire.

The Cambridge history of christianity. Vol.II.