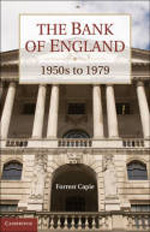 This history of the Bank of England takes its story from the 1950s to the end of the 1970s. This period probably saw the peak of the Bank's influence and prestige, as it dominated the financial landscape. One of the Bank's central functions was to manage the exchange rate. It was also responsible for administering all the controls that made up monetary policy. In the first part of the period, the Bank did all this with a remarkable degree of freedom. But economic policy was a failure, and sluggish output, banking instability, and rampant inflation characterized the 1970s. The pegged exchange rate was discontinued, and the Bank's freedom of movement was severely constrained, as new approaches to policy were devised and implemented. The Bank lost much of its freedom of movement but also took on more formal supervision.