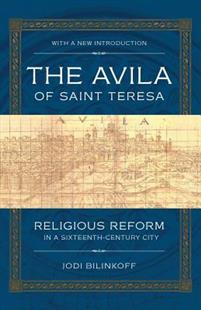 The Avila of Saint Teresa provides both a fascinating account of social and religious change in one important Castilian city and a historical analysis of the life and work of the religious mystic Saint Teresa of Jesus. Jodi Bilinkoff's rich socioeconomic history of sixteenth-century Avila illuminates the conditions that helped to shape the religious reforms for which the city's most famous citizen is celebrated.

Bilinkoff takes as her subject the period during which Avila became a center of intense religious activity and the home of a number of influential mystics and religious reformers. During this time, she notes, urban expansion and increased economic opportunity fostered the social and political aspirations of a new "middle class" of merchants, professionals, and minor clerics. This group supported the creation of religious institutions that fostered such values as individual spiritual revitalization, religious poverty, and apostolic service to the urban community. According to Bilinkoff, these reform movements provided an alternative to the traditional, dynastic style of spirituality expressed by the ruling elite, and profoundly influenced Saint Teresa in her renewal of Carmelite monastic life.

A focal point of the book is the controversy surrounding Teresa's foundation of a new convent in August 1562. Seeking to discover why people in Avila strenuously opposed this ostensibly innocent act and to reveal what distinguished Teresa's convent from the many others in the city, Bilinkoff offers a detailed examination of the social meaning of religious institutions in Avila. Historians of early modern Europe, especially those concerned with the history of religious culture, urban history, and women's history, specialists in religious studies, and other readers interested in the life of Saint Teresa or in the history of Catholicism will welcome The Avila of Saint Teresa.

With a new introduction.