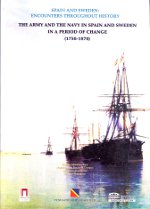 The army and the navy in Spain and Sweden in a period of change (1750-1870)
Spain and sweden: encounters throughout history

The army and navy are two subjects of enormous historiographic interest, proving increasingly attractive both to scholars and the public at large.
In the period running from 1750 to 1870 a series of highly important changes occurred in the army and navy affairs of he great powers, changes that completely renewed the approaches current at that time and the history of war itself.
These changes are studied here from both the Swedish and Spanish viewpoints, bringing out the impact of the above-mentioned process in both countries.
The result is a profound and vivid two-progend analysis that gives the reader a fine idea of the military and naval situation of Spain and Sweden in those years while also offering a comparison rich in contrasts.