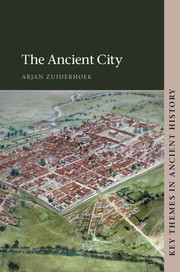 Greece and Rome were quintessentially urban societies. Ancient culture, politics and society arose and developed in the context of the polis and the civitas. In modern scholarship, the ancient city has been the subject of intense debates due to the strong association in Western thought between urbanism, capitalism and modernity. In this book, Arjan Zuiderhoek provides a survey of the main issues at stake in these debates, as well as a sketch of the chief characteristics of Greek and Roman cities. He argues that the ancient Greco-Roman city was indeed a highly specific form of urbanism, but that this does not imply that the ancient city was somehow 'superior' or 'inferior' to forms of urbanism in other societies, just (interestingly) different. The book is aimed primarily at students of ancient history and general readers, but also at scholars working on urbanism in other periods and places.

Offers a brief and accessible survey of some of the main scholarly debates on the ancient city
Provides an overview of the main characteristics of Greek and Roman cities (their politics, society, economics, urban space, and so on)
Argues for the historical specificity of the ancient city in comparison with cities in other periods and places and thus contributes to the ongoing debates concerning the nature of the ancient city and pre-modern cities more generally