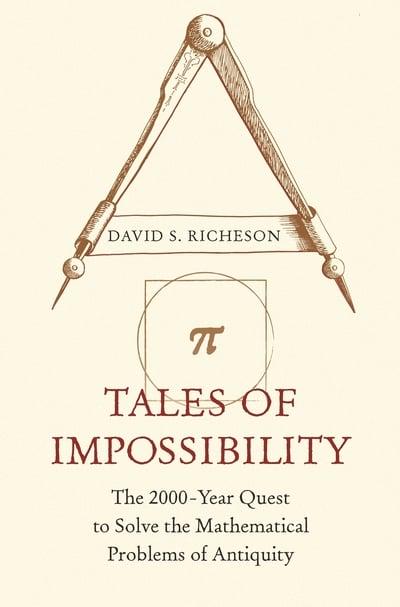 Tales of Impossibility recounts the intriguing story of the renowned problems of antiquity, four of the most famous and studied questions in the history of mathematics. First posed by the ancient Greeks, these compass and straightedge problems-squaring the circle, trisecting an angle, doubling the cube, and inscribing regular polygons in a circle-have served as ever-present muses for mathematicians for more than two millennia. David Richeson follows the trail of these problems to show that ultimately their proofs-demonstrating the impossibility of solving them using only a compass and straightedge-depended on and resulted in the growth of mathematics.

Richeson investigates how celebrated luminaries, including Euclid, Archimedes, Viète, Descartes, Newton, and Gauss, labored to understand these problems and how many major mathematical discoveries were related to their explorations. Although the problems were based in geometry, their resolutions were not, and had to wait until the nineteenth century, when mathematicians had developed the theory of real and complex numbers, analytic geometry, algebra, and calculus. Pierre Wantzel, a little-known mathematician, and Ferdinand von Lindemann, through his work on pi, finally determined the problems were impossible to solve. Along the way, Richeson provides entertaining anecdotes connected to the problems, such as how the Indiana state legislature passed a bill setting an incorrect value for pi and how Leonardo da Vinci made elegant contributions in his own study of these problems.

Taking readers from the classical period to the present, Tales of Impossibility chronicles how four unsolvable problems have captivated mathematical thinking for centuries.