States and markets
a primer on political economy

Political economy is the study of decentralized and centralized mechanisms for allocating resources and distributing incomes: markets and states. Both markets and states can be organized and combined in a variety of ways and they jointly determine what the economy produces as well as who gets what. The purpose of this book is to introduce the reader to the concepts and tools for studying relations between states and markets. The focus is methodological. Both the economy and the state are analyzed as networks of relations between principals and agents, occupying particular places in the institutional structure. Having introduced the principal-agent framework, the book analyzes systematically the effect of the organization of the state on the functioning of the economy. The central question is under what conditions government will do what they should be doing and not do what they should not INDICE Part I. Decentralized Mechanisms: 2. Market miracles and market failures 3. Incomplete markets, imperfect information 4. Principal-agent framework Part II. Centralized Mechanisms: 5. The state 6. Governments and private agents: regulation 7. Politicians and bureaucrats: oversight 8. Citizens and politicians: representation Part III. The State and the Economy: 9. Government and economic growth 10. Government and redistribution 11. Government and insurance 12. Epilogue 13. Additional references

Democracy and the rule of Law 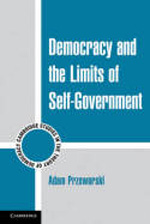 Democracy and the limits of self-government