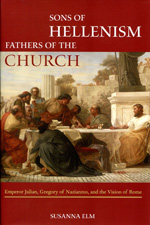 Sons of Hellenism, Fathers of The Church
Emperor Julian, Gregory of Nazianzus, and the vision of Rome

This groundbreaking study brings into dialogue for the first time the writings of Julian, the last non-Christian Roman Emperor, and his most outspoken critic, Bishop Gregory of Nazianzus, a central figure of Christianity. Susanna Elm compares these two men not to draw out the obvious contrast between the Church and the Emperor's neo-Paganism, but rather to find their common intellectual and social grounding. Her insightful analysis, supplemented by her magisterial command of sources, demonstrates the ways in which both men were part of the same dialectical whole. Elm recasts both Julian and Gregory as men entirely of their times, showing how the Roman Empire in fact provided Christianity with the ideological and social matrix without which its longevity and dynamism would have been inconceivable.