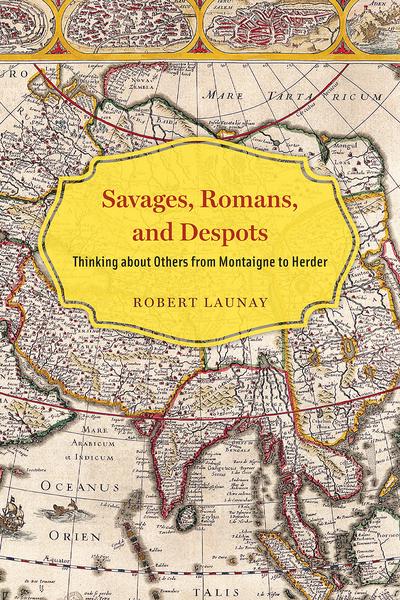 Savages, romans, and despots
thinking about others from Montaigne to Herder

From the sixteenth to the eighteenth centuries, Europeans struggled to understand their identity in the same way we do as individuals: by comparing themselves to others. In Savages, Romans, and Despots, Robert Launay takes us on a fascinating tour of early modern and modern history in an attempt to untangle how various depictions of "foreign" cultures and civilizations saturated debates about religion, morality, politics, and art.

Beginning with Mandeville and Montaigne, and working through Montesquieu, Diderot, Gibbon, Herder, and others, Launay traces how Europeans both admired and disdained unfamiliar societies in their attempts to work through the inner conflicts of their own social worlds. Some of these writers drew caricatures of "savages," "Oriental despots," and "ancient" Greeks and Romans. Others earnestly attempted to understand them. But, throughout this history, comparative thinking opened a space for critical reflection. At its worst, such space could give rise to a sense of European superiority. At its best, however, it could prompt awareness of the value of other ways of being in the world. Launay's masterful survey of some of the Western tradition's finest minds offers a keen exploration of the genesis of the notion of "civilization," as well as an engaging portrait of the promises and perils of cross-cultural comparison.