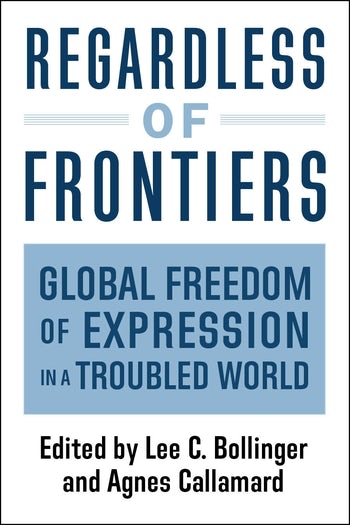 Regardless of frontiers
global freedom of expression in a troubled world

The United Nations’ Universal Declaration of Human Rights in 1948 proclaimed a vision of freedom of expression exercised regardless of frontiers. Nonetheless, laws and norms regarding the freedom or limits of expression are typically established and understood at the national level. In today’s interconnected world, newfound threats to free expression have suddenly arisen. How can this fundamental right be secured at a global level?

This volume brings together leading experts from a variety of fields to critically evaluate the extent to which global norms on freedom of expression and information have been established and which actors and institutions have contributed to their diffusion. The authors also consider ongoing and new challenges to these norms, from conflicts over hate speech and the rise of populism to authoritarian governments, as well as the profound disruption introduced by the internet. Together, the essays lay the groundwork for an international legal doctrine on global freedom of expression that considers issues such as access to government-held information, media diversity, and political speech. As the world risks renouncing previous commitments to the freedom of expression, Regardless of Frontiers serves as a timely reminder of just how much is at stake and what needs protecting.

Preface: The Idea of Global Norms of Freedom of Speech and Press, by Lee C. Bollinger
Introduction: Regardless of Frontiers? Global Freedom of Expression Norms for a Troubled World, by Agnès Callamard
Freedom of Expression and Three Concepts of the Global, by Frederick Schauer
Part I: A Global Threshold
1. Global Norms on Media Regulation: The Devil Is in the Detail, by Toby Mendel
2. The Right of Access to Information Held by Public Authorities: Emergence as a Global Norm, by Sandra Coliver
3. The Protection of Political Expression, by Nani Jansen Reventlow and Jonathan McCully
4. International, Regional, and National Approaches to the Protection of Reputation and Freedom of Expression, by Peter Noorlander
5. Is There a Global Norm for the Protection of Journalists’ Sources?, by Richard Danbury
Part II: Intergovernmental Institutions and International Actors as Norm Entrepreneurs
6. The Norm Entrepreneurship of the United Nations, by Tarlach McGonagle and Emmanuel Vargas Penagos
7. On “Balancing” and “Social Watchdogs”: The European Court of Human Rights as a Norm Entrepreneur for Freedom of Expression, by Jan Oster
8. The Role of the Inter-American Human Rights System in the Emergence and Development of Global Norms on Freedom of Expression, by Catalina Botero-Marino
9. The African Human Rights System: A New Actor of Normative Integration, by Catherine Anite
10. Globalizing the Battle Against Impunity, by Joel Simon and Elisabeth Witchel
Part III: Conflicts, Competition, Antiglobalization
11. Norms in Conflict: The Restraints on the Emergence of a Global Free Speech Norm, by Agnès Callamard and Sejal Parmar
12. Making Choices: Social Media Platforms and Freedom of Expression Norms, by Chinmayi Arun
13. China, Information Technology, and Global Freedom of Expression: A Story of Sovereignty and Global Capitalism, by Séverine Arsène
14. The Rise of Global Counternorms, by Alexander Cooley
Part IV: Interactive Global Jurisprudence
15. New York Times Co. v. Sullivan, by Hawley Johnson
16. Handyside v. the United Kingdom, by Amalie Bang
17. Claude Reyes et al. v. Chile: A Global Trailblazer, by Sofía Jaramillo-Otoya
18. Lohé Issa Konaté v. Burkina Faso: A Tipping Point for Decriminalization of Defamation in Africa, by Hawley Johnson
19. Fast, Far, and Deep: The Journey of the Right to Be Forgotten, by Bach Avezdjanov
List of Contributors