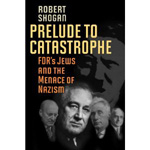 Prelude to catastrophe
FDR's jews and the menace of nazism

The Jews who so deeply admired Roosevelt made up the richest, most influential Jewish community in the world, leaders in government, commerce, and the arts. Yet by the time Franklin Roosevelt died in office, six million European Jews had been murdered by the Nazis while neither FDR nor American Jews lifted much more than a finger to help them. How did the president, the nation he led, and American Jewry allow this to happen? There is no simple answer, but Robert Shogan seeks a partial explanation by examining the behavior of a handful of Jews, so close to Roosevelt and supposedly so influential that they could be considered the president's Jews.