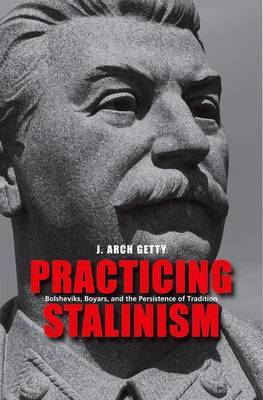 Practicing stalinism
bolsheviks, boyars, and the persistence of tradition

In old Russia, patron/client relations, "clan" politics, and a variety of other informal practices spanned the centuries. Government was understood to be patrimonial and personal rather than legal, and office-holding was far less important than proximity to patrons. Working from heretofore unused documents from the communist archives, J. Arch Getty shows how these political practices and traditions from old Russia have persisted throughout the twentieth-century Soviet Union and down to the present day. The book's chapters examine a number of case studies of political practices in the Stalin era and after. These include cults of personality, the transformation of Old Bolsheviks into noble grandees, the communist party's personnel selection system, and the rise of political clans ("family circles") after the 1917 revolutions. Stalin's conflicts with these clans, and his eventual destruction of them, were key elements in the Great Purges of the 1930s. But although Stalin could destroy the competing clans he could not destroy the historically embedded patron-client relation, as a final chapter on political practice under Putin shows.