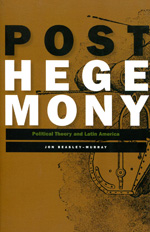 Posthegemony is an investigation into the origins, limits, and possibilities for contemporary politics and political analysis. Jon Beasley-Murray grounds his theoretical discussion with accounts of historical movements in Latin America, from Columbus to Chávez, and from Argentine Peronism to Peru's Sendero Luminoso.

Challenging dominant strains in social theory, Beasley-Murray contends that cultural studies simply replicates the populism that conditions it, and that civil society theory merely nourishes the neoliberalism that it sets out to oppose. Both end up entrenching the fiction of a social contract. In place of hegemony or civil society, Beasley-Murray presents a theory of posthegemony, focusing on affect, habit, and the multitude. This approach addresses an era of biopolitics and bare life, tedium and terror, in which state control is ever more pervasive but something always escapes.

In his thorough examination, Beasley-Murray undoes the dominant narrative of hegemonic projects and counterhegemonic resistance, of civilization and subalternity, to reveal instead a history of failed contracts and unpredicted insurgencies.