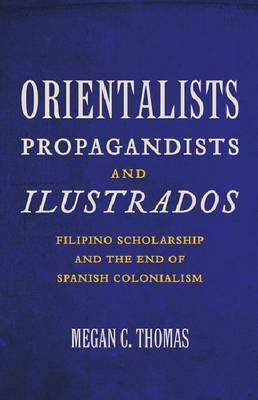 Orientalist, propagandists, and ilustrados
filipino scholarship and the end of spanish colonialism

The writings of a small group of scholars known as the ilustrados are often credited for providing intellectual grounding for the Philippine Revolution of 1896. Megan C. Thomas shows that the ilustrados’ anticolonial project of defining and constructing the “Filipino” involved Orientalist and racialist discourses that are usually ascribed to colonial projects, not anticolonial ones. According to Thomas, the work of the ilustrados uncovers the surprisingly blurry boundary between nationalist and colonialist thought.

By any measure, there was an extraordinary flowering of scholarly writing about the peoples and history of the Philippines in the decade or so preceding the revolution. In reexamining the works of the scholars José Rizal, Pardo de Tavera, Isabelo de los Reyes, Pedro Paterno, Pedro Serrano Laktaw, and Mariano Ponce, Thomas situates their writings in a broader account of intellectual ideas and politics migrating and transmuting across borders. She reveals how the ilustrados both drew from and refashioned the tools and concepts of Orientalist scholarship from Europe.