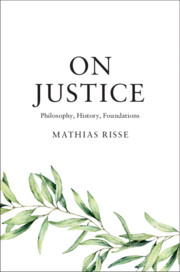 Though much attention has been paid to different principles of justice, far less has been done reflecting on what the larger concern behind the notion is. In this work, Mathias Risse proposes that the perennial quest for justice is about ensuring that each individual has an appropriate place in what our uniquely human capacities permit us to build, produce, and maintain, and is appropriately respected for the capacity to hold such a place to begin with. Risse begins by investigating the role of political philosophers and exploring how to think about the global context where philosophical inquiry occurs. Next, he offers a quasi-historical narrative about how the notion of distributive justice identifies a genuinely human concern that arises independently of cultural context and has developed into the one we should adopt now. Finally, he investigates the core terms of this view, including stringency, moral value, ground and duties of justice.