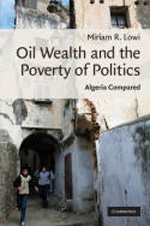 Oil wealth and the poverty of politics
Algeria compared

How can we make sense of Algeria's post-colonial experience - the tragedy of unfulfilled expectations, the descent into violence, the resurgence of the state? Oil Wealth and the Poverty of Politics explains why Algeria's domestic political economy unravelled from the mid-1980s, and how the regime eventually managed to regain power and hegemony. Miriam Lowi argues the importance of leadership decisions for political outcomes, and extends the argument to explain the variation in stability in oil-exporting states following economic shocks. Comparing Algeria with Iran, Iraq, Indonesia and Saudi Arabia, she asks why some states break down and undergo regime change, while others remain stable, or manage to re-stabilise after a period of instability. In contrast with exclusively structuralist accounts of the rentier state, this book demonstrates, in a fascinating and accessible study, that political stability is a function of the way in which structure and agency combine.