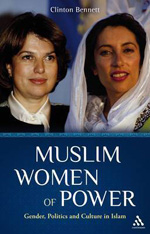 Muslim women of power
gender, politics and culture in Islam

This is an exploration of powerful Muslim women covering issues of gender, culture and politics in Islam. Five women have served as leaders of Muslim countries, namely Megawati Sukarnoputri (Vice President of Indonesia, 1991-2001 and President 2002-4), Benazir Bhutto (PM of Pakistan, 1988-90 and 1993-6), Sheikh Hasina (PM of Bangaldesh, 1996- 2001), Khalida Zia (PM of Bangladesh, 1991-5 and 2001 to 2006) and Tansu Ciller (PM of Turkey, 1993-6). This is an extraordinary record and somewhat of a challenge to the widespread perception that Muslim women are oppressed. Four of the women belonged to political families by birth or marriage, raising interesting questions about the extent to which this played a role alongside their skills and personal qualities in their rise to power. To what degree did culture rather than Islam aid and abet their roles, or indeed is it sustainable to distinguish Islam from culture. This study of the role of these five powerful Muslim women uses their life and work to explore relevant issues, such as the role of culture, gender in Islam and the nature of the Islamic state.

The Bloomsbury Companion to islamic studies