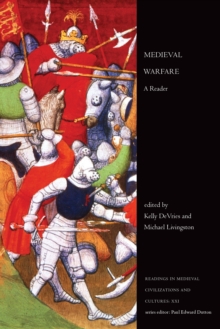 Medieval Warfare: A Reader examines how armed conflict was experienced in the Middle Ages both on the field of battle and at home. This comprehensive collection of more than 130 primary-source materials—some translated here for the first time—traces over one thousand years of military developments, including the fall of Rome, the fight for Jerusalem, the building of castles and other fortifications, the rise of gunpowder, and the negotiation of treaties. Developed by two of the leading experts in medieval military history, the readings tell stories of terrors and tragedies, triumphs and technologies in the Middle Ages. By reclaiming the voices of victims and veterans that have previously been ignored, the editors stake out a powerful new perspective on the long history of military conflict and suffering.