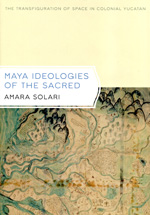 As Spaniards built colonies in the New World, men of the cloth saw within ancient ruins and inhabited native towns great potential for easing the colonization effort. In the Yucatan, which is the locus of this study, Franciscan friars seized upon the opportunity to "conquer" Maya places for Christianity. Their practice of remaking a Maya town into a Christian town - often building their church on the very foundations of an ancient sacred site - represented the absolute triumph of their religion, the ultimate defeat of the pagan demonic forces by the true faith. This book addresses the Franciscan evangelical campaign of sixteenth-century Yucatan and investigates how Maya conceptions of space, landscape, and history influenced the conversion strategies adopted by the friars. Amara Solari analyzes colonial manuscripts written in Yucatec Mayan to discern how Maya communities conceived of land (and more abstractly, space) and how they encoded space with cultural significance. She demonstrates how these indigenous understandings of space and its history, a locale's "spatial biography," made the transference of sacrality possible. Using the Maya city of Itzmal as a case study, Solari examines the process of transferring sacrality and healing abilities from the Maya deity Itzamnaaj to a numinous statue of the Virgin Mary. She also reveals how the hybrid religious ideology that evolved allowed the native Maya population to subvert colonial political and religious programs and maintain community identity in the early years of the colonial period.