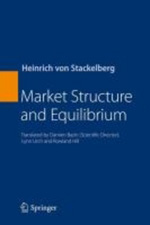 In his book "Marktform und Gleichgewicht", published initially in 1934, Heinrich von Stackelberg presented his groundbreaking leadership model of firm competition. In a work of great originality and richness, he described and analyzed a market situation in which the leader firm moves first and the follower firms then move sequentially. This game-theoretic model, now widely known as Stackelberg competition, has had tremendous impact on the theory of the firm and economic analysis in general, and has been applied to study decision-making in various fields of business. As the first translation of von Stackelberg's book into English, this volume makes his classic work available in its original form to an English-speaking audience for the very first time.