Making spaniards
Primo de Rivera and the nationalization of the masses, 1923-30

The regime of Primo de Rivera in Spain was one of the major dictatorships of the interwar period. "Making Spaniards" examines how the military regime created nationalist doctrine, rituals and symbols and how these were transmitted throughout Spanish society in an attempt to 'make' new authoritarian Spaniards and halt democratic reform. In doing so, the dictatorship of Primo de Rivera also elaborated many of the political ideas that eventually became key principles of the Franco dictatorship. 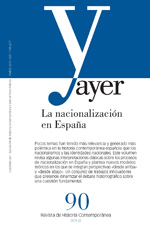