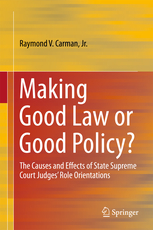 This book uses role theory to analyze the judicial decisions made by state supreme court judges. Grounded in the fields of anthropology, business management, psychology, and sociology, role theory holds that, for each position an individual occupies in society, he or she creates a role orientation, or a belief about the limits of proper behavior. Judicial role orientation is conceptualized as the stimuli that a judge feels can legitimately be allowed to influence his or her decision-making and, in the case of conflict among influences, what priorities to assign to different decisional criteria. This role orientation is generally seen as existing on a spectrum ranging from activist to restraintist. Using multi-faceted data collection and empirical testing, this book discusses the variation in judges’ role orientations, the role that personal institutional structure and judges' backgrounds play in determining judicial orientations, and the degree to which judges’ orientations affect their decision-making. The first study to provide cross-institutional research on state supreme court judges, this book expands and advances the literature on judicial role orientation. As such, this book will be of interest to graduate students and researchers studying political science, public policy, law, and the courts.

The Development of the Judicial Role Orientation.

The Impact of the Judicial Role Orientation.