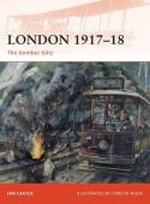 Illustrated by Christa Hook. On a sunny May afternoon in 1917, the peace of an English seaside town was shattered when a flight of German Gotha bombers appeared without warning. Twenty-three Gothas had set out to attack London in this first bomber raid, but heavy cloud forced them to target Folkestone and the Shorncliffe army camp instead. It was the start of a new phase of the war aimed at destroying the morale of the British people. London's defences were quickly overhauled to face this new threat, providing the basis for Britain's defence during World War II. This book tells the story of the Gotha and the massive Staaken 'Giant' bomber raids against London.