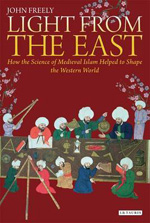 Long before the European Renaissance, while the western world was languishing in what was once called the 'Dark Ages', the Arab world was ablaze with the knowledge, invention and creativity of its Golden Age. This is the story of how Islamic science, which began with the translation of Greek manuscripts into Arabic in eighth-century Baghdad, preserved and enhanced the knowledge acquired from Greece, Mesopotamia, India and China. Through the astrologers, physicians, philosophers, mathematicians and alchemists of the Muslim world, this knowledge was carried from Samarkand and Baghdad to Cordoba and beyond, influencing western thinkers from Thomas Aquinas and Copernicus and helping to inspire the cultural phenomenon of the Renaissance. John Freely tells this spellbinding story against a background of the melting pot of cultures involved and concludes with the decline of Islam's Golden Age, which led the West to forget the debt it owed to the Muslim world and the influence of medieval Islamic civilisation in forging the beginnings of modern science.