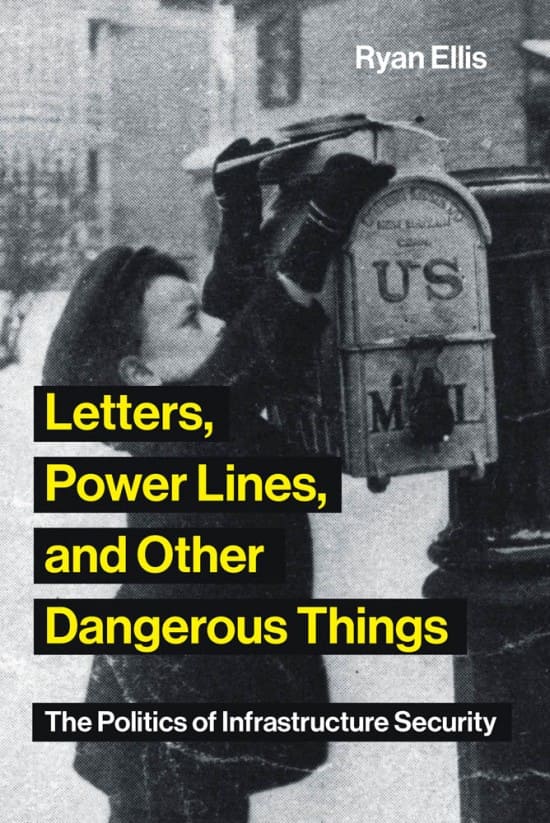 Letters, power lines, and other dangerous things
The politics of infrastructure security

An examination of how post-9/11 security concerns have transformed the public view and governance of infrastructure.

The open access edition of this book was made possible by generous funding from Arcadia – a charitable fund of Lisbet Rausing and Peter Baldwin.

After September 11, 2001, infrastructures—the mundane systems that undergird much of modern life—were suddenly considered “soft targets” that required immediate security enhancements. Infrastructure protection quickly became the multibillion dollar core of a new and expansive homeland security mission. In this book, Ryan Ellis examines how the long shadow of post-9/11 security concerns have remade and reordered infrastructure, arguing that it has been a stunning transformation. Ellis describes the way workers, civic groups, city councils, bureaucrats, and others used the threat of terrorism as a political resource, taking the opportunity not only to address security vulnerabilities but also to reassert a degree of public control over infrastructure.

Nearly two decades after September 11, the threat of terrorism remains etched into the inner workings of infrastructures through new laws, regulations, technologies, and practices. Ellis maps these changes through an examination of three U.S. infrastructures: the postal system, the freight rail network, and the electric power grid. He describes, for example, how debates about protecting the mail from anthrax and other biological hazards spiraled into larger arguments over worker rights, the power of large-volume mailers, and the fortunes of old media in a new media world; how environmental activists leveraged post-9/11 security fears over shipments of hazardous materials to take on the rail industry and the chemical lobby; and how otherwise marginal federal regulators parlayed new mandatory cybersecurity standards for the electric power industry into a robust system of accountability.