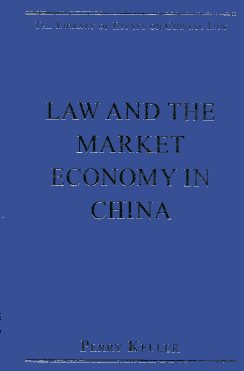 Law and market economy in China

This volume concerns several aspects of China's changing market based economy. These include commercial contract enforcement, corporate structures, competition law and other issues related to China's membership in the WTO. In the past two decades, the rapid integration of China's economy into the global marketplace has created obligations and expectations of non-discrimination and regulatory transparency in domestic markets. The Chinese government has responded by demanding better governance within major companies, market sectors and public administration generally. However, as the articles in this volume show, it has struggled to find a corporate structure capable of absorbing external equity investment and participation but still amenable to direct and indirect state guidance. It has also moved cautiously in creating legal controls over unfair competition. Moreover, the protection of state owned enterprises, which serve as vehicles for domestic economic, social and political policy, has been a recurring issue in China's WTO trade disputes.

Obligations and property rights in China