This important new study shifts the focus of scholarly and policy debates around the role of labour law in an era of globalisation away from the countries and labour law systems of the North to those of the global South. Placing its analysis within the context of the current scholarly debates on the challenges and future of labour law, the book critically reviews the relevant literature and reflects upon the way workers' protection tends to be conceptualised as well as on the adequacy of the legal categories and tools used to further it, with special attention given to the effectiveness of labour legislation to promoting gender equality. It argues that there is a mismatch between the realities of the developing world and the socio-economic, legal, political and cultural underpinnings of labour law, which originates from its development in post-colonial African and South Asian countries and, to a lesser extent, in Latin American ones. This divergence persists, while new manifestations have appeared due to globalisation. The study contends that the structural features of developing countries combined with the challenges of globalisation have resulted in a significant number of workers falling outside the scope of protection of labour law, either de jure or de facto. Against this background, it explores the main regulatory and policy responses developed at different governance levels to enhance the scope and application of labour regulation in Latin America, South Asia and Southern Africa. This is a co-publication with the International Institute of Labour Studies. 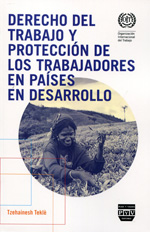