Julius Caesar is not only the most famous Roman of them all. He has also been surprisingly relevant in many different periods, for many different societies and people. Edited by a leading expert on the reception of ancient Rome, this interdisciplinary volume examines Caesar's role in Western culture across a wide chronological range and diverse media. Ranging over the fields of religious, military, and political history, archaeology, architecture and urban planning, the visual arts, and literary, film, theatre and cultural studies, contributors examine the Caesars of Italy, France, Germany, Britain, and the United States. Their objects of analysis extend from Caesar's own commentaries on the Gallic wars composed in the 50s bce through Shakespeare's Julius Caesar, on to images of Caesar in twentieth-century Fascist Italy's popular culture right up to contemporary cinema's Caesar and twenty-first century debates about American empire. 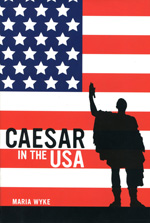 Caesar in the USA