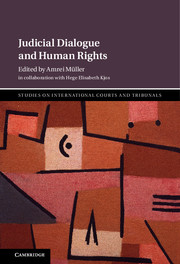 This book offers a comprehensive analysis of the extent, method, purpose and effects of domestic and international courts' judicial dialogue on human rights. The analysis covers national courts' judicial dialogue from different regions of the world, including Eastern Europe, Latin America, Canada, Nigeria and Malaysia. The text is complemented by studies on specific subject matters such as LGTBI people's and asylum seekers' rights that further contribute to a better understanding of factors that stimulate or hold back judicial dialogue, and by first hand insights of domestic and European Court of Human Rights judges into their courts' involvement in judicial dialogue. The book features contributions from leading scholars and judges, whose combined perspectives provide an interesting and timely study.