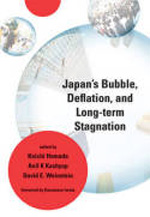 Eds. Koichi Hamada, Anil K. Kashyap, David E. Weinstein. Japan's economic bubble burst in the early 1990s, and the country entered its famous "lost decade"--a period of stagnation and economic disruption that persisted until 2003. The current declines in global equity and real estate markets have eerie parallels to Japan's economic woes of the 1990s. If we are to avoid repeating Japan's experience on a global scale, we must understand what happened, why it happened, and the effectiveness (or ineffectiveness) of Japan's policy choices. In this volume, prominent economists--Japan specialists and others--bring state- of-the-art models and analytic tools to bear on these questions. The essays generate new facts and new findings about Japan's lost decade. As much of the research shows, the slowdown can be broken down into two phases: a typical recession, followed by a breakdown in the economy likely due to insufficient restructuring, which is not well described by conventional models. The contributors offer forceful arguments showing that Japan's experience, and the unconventional--sometimes unsuccessful--measures adopted by Japan's government and central bank, offer valuable lessons for our post-boom world.