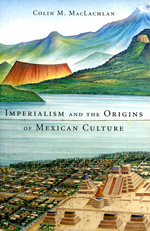 Imperialism and the origins of mexican culture

With an empire stretching across central Mexico, unmatched in military and cultural might, the Aztecs seemed poised on the brink of a golden age in the early sixteenth century. But the arrival of the Spanish changed everything. Imperialism and the Origins of Mexican Culture "chronicles this violent clash of two empires and shows how modern Mestizo culture evolved over the centuries as a synthesis of Old and New World civilizations. Colin MacLachlan begins by tracing Spain and Mesoamerica s parallel trajectories from tribal enclaves to complex feudal societies. When the Spanish laid siege to Tenochtitlan and destroyed it in 1521, the Aztecs could only interpret this catastrophe in cosmic terms. With their gods discredited and their population ravaged by epidemics, they succumbed quickly to Spanish control which meant submitting to Christianity. Spain had just emerged from its centuries-long struggle against the Moors, and zealous Christianity was central to its imperial vision. But Spain s conquistadores far outnumbered its missionaries, and the Church s decision to exclude Indian converts from priesthood proved shortsighted. Native religious practices persisted, and a richly blended culture part Indian, part Christian began to emerge. The religious void left in the wake of Spain s conquests had enduring consequences. MacLachlan s careful analysis explains why Mexico is culturally a Mestizo country while ethnically Indian, and why modern Mexicans remain largely orphaned from their indigenous heritage the adopted children of European history."