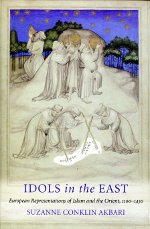 Idols in the East
european representations of Islam and the Orient, 1100-1450

Representations of Muslims have never been more common in the Western imagination than they are today. Building on Orientalist stereotypes constructed over centuries, the figure of the wily Arab has given rise, at the dawn of the twenty-first century, to the "Islamist" terrorist. In Idols in the East, Suzanne Conklin Akbari explores the premodern background of some of the Orientalist types still pervasive in present-day depictions of Muslims-the irascible and irrational Arab, the religiously deviant Islamist-and about how these stereotypes developed over time.

Idols in the East contributes to the recent surge of interest in European encounters with Islam and the Orient in the premodern world. Focusing on the medieval period, Akbari examines a broad range of texts including encyclopedias, maps, medical and astronomical treatises, chansons de geste, romances, and allegories to paint an unusually diverse portrait of medieval culture. Among the texts she considers are The Book of John Mandeville, The Song of Roland, Parzival, and Dante's Divine Comedy. From them she reveals how medieval writers and readers understood and explained the differences they saw between themselves and the Muslim other.

Looking forward, Akbari also comes to terms with how these medieval conceptions fit with modern discussions of Orientalism, thus providing an important theoretical link to postcolonial and postimperial scholarship on later periods. Far reaching in its implications and balanced in its judgments, Idols in the East will be of great interest to not only scholars and students of the Middle Ages but also anyone interested in the roots of Orientalism and its tangled relationship to modern racism and anti-Semitism.

Marco Polo and the encounter of East and West

Seeing through the Veil