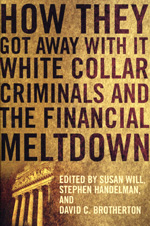 An international team of scholars with backgrounds in criminology, sociology, economics, business, government regulation, and law examine the historical, social, and cultural causes of the 2008 economic crisis. They also take stock of the long-term devastation done to governments, businesses, and individuals, and the ongoing, systemic issues that have so far allowed the perpetrators to get away with their crimes. Insightful essays probe the workings of the toxic subprime loan industry, the role of external auditors, the consequences of Wall Street deregulation, the manipulations of alpha hedge fund managers, and the "Ponzi-like" culture of contemporary capitalism. They unravel modern finance's complex schematics and highlight their susceptibility to corruption, fraud, and outright racketeering. They examine the involvement of enablers, including accountants, lawyers, credit rating agencies, and regulatory workers, who failed to protect the public interest and enforce existing checks and balances. While the United States was "ground zero" of the meltdown, the financial crimes of other countries intensified the disaster. Internationally-focused essays consider bad practice in China and the European property markets, and they draw attention to the far-reaching consequences of transnational money laundering and tax evasion schemes. By approaching the 2008 crisis from the perspective of white collar criminology, contributors build a more general understanding of the collapse, and they crystallize the multiple human and institutional factors preventing justice from capturing even the worst offenders.