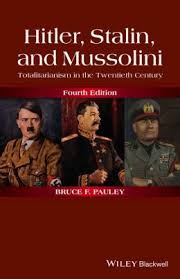 Hitler, Stalin, and Mussolini
totalitarianism in the Twentieth Century

The new, fourth edition of Bruce Pauley’s Hitler, Stalin, and Mussolini: Totalitarianism in the Twentieth Century features an updated and expanded bibliographical essay and the latest scholarship on the wartime goals of Hitler and Stalin. Also included is new information on the disintegration of the Soviet empire. Like its predecessors, this book presents an innovative comparison of the origins, development, and demise of the three forms of totalitarianism that emerged in Europe early in the twentieth century. After addressing the failure of the preceding regimes, it traces the development of the totalitarian movements of Nazi Germany, the Soviet Union, and Fascist Italy—showing how each national leader was able to capture and consolidate authority before the inevitable plummet from power. While offering vivid portraits of the dictators’ youths, early careers, relationships with women, management styles, and cults of personality (both personally crafted and as created by their propaganda machines), Pauley moves beyond conventional narratives of totalitarianism to offer a unique, interpretive comparison of the economics, culture, education, and health-care systems of the three dictatorships. Other themes explored include the regimes' position on fine arts and popular entertainment, treatment of women and young people, and terroristic oppression of religious institutions and minorities. Hitler, Stalin, and Mussolini offers illuminating new insights on many facets of the rise and fall of these three infamous dictatorships of twentieth-century Europe.