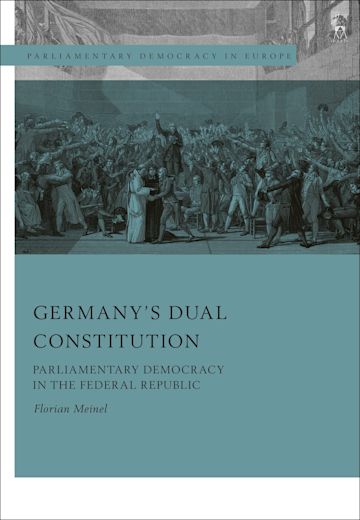 This book offers a compelling and persuasive framework for understanding the German constitutional system. It argues that it can only be fully understood as a dual structure combining two layers with little in common. The first layer is the basic administrative institutional structure, comprised of federal institutions. The second layer is that of parliamentary democracy. It is the interplay between the two, as mediated by the chancellery, the major political parties and the Federal Constitutional Court, which lies at the heart of the German constitutional arrangement.

This innovative hybrid perspective allows for a better understanding of the current challenges of parliamentary government and its potential long-term development. An updated translation of its impactful German edition, this provides one of the most brilliant introductions to governmental systems of one of the world's most influential states.

1. Introduction: The Two Crises of Parliamentary Government
I. Brexit and the Europeanisation of Westminster Parliamentarianism
II. Master Narratives of the German Democracy – and Recent Doubts
III. Realities of Mass and Social Media
IV. Outline

5. The Crisis of the Mediating Institutions
I. The Abiding Peculiarity of Parliamentary Government in the Federal Republic
II. The Creeping Decline of the Popular Parties as a Constitutional Factor
A. The Limits of Culturalist Explanations
B. In Praise of Lobbyism, or: The End of West German Corporatism
C. There are No Small Parties Any More
D. At the Borders of Government and Opposition
E. Forming Governments I: Why do Coalition Talks Take Longer and Longer
F. Forming Governments II: Intervals of the Political System
G. Forming Governments III: The Latency of the Presidential Factor
III. The Dilemma of the Federal Constitutional Court
A. The Temptations of the Grand Coalition
B. Europe and the Difficulties of Bringing Back in Parliament
C. Formalising the Informal: A Juridical Dilemma IV. The Chancellery Unchained
A. What Matters when it's a Matter for the Boss
B. The Creeping Unitarisation of the Executive

6. Potentials and Weaknesses of Parliamentary Control
I. What is Parliamentary Scrutiny?
A. Trust and Scrutiny
B. The Dialectic of Ministerial Responsibility
C. Who is the Federal Government? or: The Object of Scrutiny
II. Functions and Limits of Plenary Control
A. Questions of Style, Rules of Procedure
B. The Lack of Rhetorical Culture
C. The Complicity of the Opposition
III. In the Engine Room of Responsibility: The Committees
A. The Masterstroke of the 1969 Parliamentary Reform
B. Politics and Bureaucracy in the Committees
IV. The Multi-Level System, Information Overkill and New
Administrative Models – Aspects of Unbounded Control Tasks
A. How to Control 'Europe'?
B. Scrutiny or Executive Self-Control? A Passive Parliament
C. The Rise of Agencies and the Limits of Inquiry Rights
D. Government Scrutiny by Corporate Governance: An Unconstitutional Fallacy