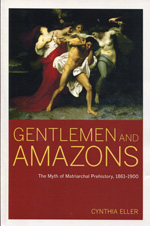 Gentlemen and amazons
the myth of matriarchal prehistory, 1861-1900

"Gentlemen and Amazons" traces the nineteenth-century genesis and development of an important contemporary myth about human origins: that of an original prehistoric matriarchy. Cynthia Eller explores the intellectual history of the myth, which arose from male scholars who mostly wanted to vindicate the patriarchal family model as a higher stage of human development. Eller tells the stories these men told, analyzes the gendered assumptions they made, and provides the necessary context for understanding how feminists of the 1970s and 1980s embraced as historical "fact" a discredited nineteenth-century idea.