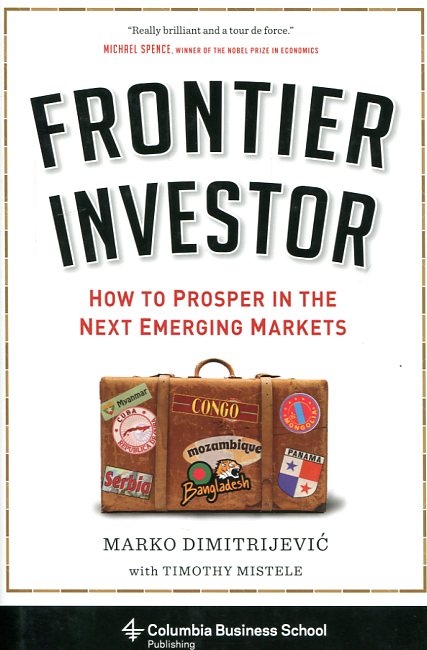 Frontier investor
how to prosper in the next emerging markets

Where are the next decade's greatest investment opportunities? Veteran investor Marko Dimitrijevic argues that they can be found in frontier markets, which account for seventy-one of the world's seventy-five fastest-growing economies and 19 percent of the world's GDP. Yet many investors ignore them. Fueled by new access to technology and information, frontier markets are emerging even faster than their predecessors, making them an essential component of a globally diversified portfolio. In Frontier Investor, Dimitrijevic shows through colorful case studies, compelling charts, and fascinating travel anecdotes that it is not only possible but prudent to invest in these unfamiliar and undervalued options. Dimitrijevic explains how frontier markets such as Nigeria, Panama, and Bangladesh are poised to follow the similar paths of Chinese, Indian, and Russian markets, which were considered exotic two decades ago. He details a strategy for how and where to invest, directly or indirectly, to profit from frontier growth.