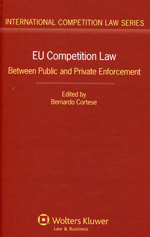 Despite several decades’ worth of explicit directives, green papers, white papers, proposals, and communications from the European Commission, the actual enforcement of competition law across the Member States today is rife with shifting patterns that escape a clearly bounded framework. The underlying cause of this disarray, the authors of this deeply engaged work contend, lies in a host of legal uncertainties scattered around the intersection where private enforcement encounters the mechanisms of decentralized public enforcement – an area where a number of general as well as special questions of EU competition law, even its very goals and principles, rise into prominence.
In this truly authoritative book, eleven well-known European jurists and academics, all experts in competition law, offer in-depth perspectives on these questions and reveal conflicts between EU competition law and enforcement regimes. The subjects on which they focus include the following:
agreements and concerted practices;
the effect on trade criterion;
the quasi legislative role of the Commission;
the need to preserve a central role for the preliminary ruling mechanism;
burden and standard of proof issues;
the role of experts;
the abuse of a dominant position in the form of ‘margin squeeze’;
the lack of transparency characterizing the European Competition Network;
leniency programmes and the circulation of evidence;
calculation of damages and the passing-on defence;
peculiarities of antitrust enforcement in the e-communications sector;
EU legislative competences in the audiovisual sector;
specific features of the pharmaceutical sector; and
recent enforcement in the financial services sector.