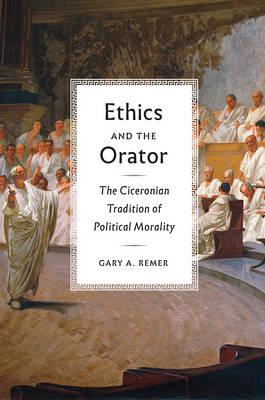 Ethics and the orator
the ciceronian tradition of political morality

For thousands of years, critics have attacked rhetoric and the actual practice of politics as unprincipled, insincere, and manipulative. In Ethics and the Orator, Gary A. Remer disagrees, offering the Ciceronian rhetorical tradition as a rejoinder. He argues that the Ciceronian tradition is based on practical or "rhetorical" politics, rather than on idealistic visions of a politics-that-never-was-a response that is ethically sound, if not altogether morally pure.

Remer's study is distinct from other works on political morality in that it turns to Cicero, not Aristotle, as the progenitor of an ethical rhetorical perspective. Contrary to many, if not most, studies of Cicero since the mid-nineteenth century, which have either attacked him as morally indifferent or have only taken his persuasive ends seriously (setting his moral concerns to the side), Ethics and the Orator demonstrates how Cicero presents his ideal orator as exemplary not only in his ability to persuade, but in his capacity as an ethical person. Remer makes a compelling case that Ciceronian values-balancing the moral and the useful, prudential reasoning, and decorum-are not particular only to the philosopher himself, but are distinctive of a broader Ciceronian rhetorical tradition that runs through the history of Western political thought post-Cicero, including the writings of Quintilian, John of Salisbury, Justus Lipsius, Edmund Burke, the authors of The Federalist, and John Stuart Mill.