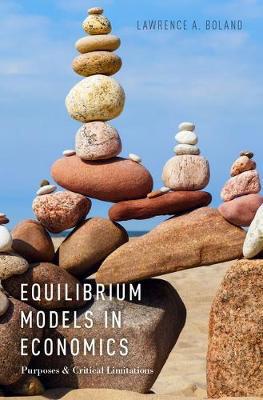 The concept of equilibrium is fundamental to economic theory, according to which, it exists when supply and demand are balanced. Equilibrium Models in Economics critically examines the major problematic assumptions employed to build equilibrium models. It gives particular attention to the assumptions used to characterize learning, knowledge and expectations. Lawrence Boland here explores whether equilibrium models can provide a realistic explanation of economic events and objects such as prices, market demands and market supplies. He traces how the different perspectives on equilibrium models represented by such creators as Kenneth Arrow, Robert Clower, and George Richardson influenced subsequent developments in economics. A key debate is about the comparative importance of whether equilibrium refers to a state of an actual economy or a property of a formal mathematical model. Another is the extent that the distinction between a model's exogenous vs. endogenous variables involves causality. Also explored are more recent efforts provided by behavioral, evolutionary, and complexity economics-whether they might change how economics is practiced in the future and how they could. Equilibrium Models in Economics is a trenchant exploration of how the discipline has grappled with attempts to understand and explain the way information, knowledge, and the expectations of actors participating in the economy influence outcomes and behavior. It presents a realistic, workable theory of knowledge and learning, simulating how decision makers and other actors operate in fast-changing equilibrium conditions.