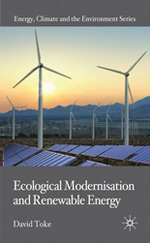 Ecological Modernisation and Renewable Energy discusses the emergence and development of the new renewable energy industry. David Toke reinvigorates ecological modernisation (EM), a key theory of environmental development. Renewable energy was developed from the grass roots into an industry that is challenging the position of conventional fuel sources by maintaining a distinct identity which attracts popular support. Toke analyses this 'identity EM' and highlights the continuing role of alliances between the renewable industries and environmental NGOs. The politics of technological identity are explored in several case studies which include studies of California in the 1970s and 1980s and the USA since the 1990s. Other countries discussed include Denmark, Germany, Spain, UK, Australia and China. Examination of what policies are needed to promote renewable energy is carried out through analysis of institutions, interest and discourse to cut through stereotyped debates about whether 'market based' or 'command and control' strategies are better.