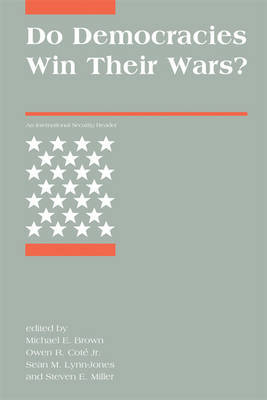 Do democracies win their wars?

In recent years, a new wave of scholarship has argued that democracies have unique advantages that enable them to compete vigorously in international politics. Challenging long-held beliefs--some of which go back to Thucydides' account of the clash between democratic Athens and authoritarian Sparta--that democracy is a liability in the harsh world of international affairs, many scholars now claim that democracies win most of their wars. [This research suggests that democracies emerge victorious because they prudently choose to fight wars that they can win, and because they can marshal more resources, make better decisions, and muster public support for their military campaigns.] Critics counter that democracy itself makes little difference in war and that other factors, such as overall power, determine whether a country tastes victory or defeat. In some cases, such as the Vietnam War, democracy may even have contributed to defeat.The book includes crucial contributions to the debate over democracy and military victory, presenting important theoretical, conceptual, and empirical arguments.