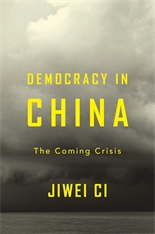 Democracy in China
the coming crisis

With Xi Jinping potentially set as president for life, China’s move toward political democracy may appear stalled. But Jiwei Ci argues that four decades of reform have created a mentality in the Chinese people that is just waiting for the political system to catch up, resulting in a disjunction between popular expectations and political realities. The inherent tensions in a largely democratic society without a democratic political system will trigger an unprecedented crisis of legitimacy, forcing the Communist Party to act or die.

Two crises loom for the government. First is the waning of the Communist Party’s revolutionary legacy, which the party itself sees as a grave threat. Second is the fragility of the next leadership transition. No amount of economic success will compensate for the party’s legitimacy deficit when the time comes. The only effective response, Ci argues, will be an orderly transition to democracy. To that end, the Chinese government needs to start priming its citizens for democracy, preparing them for new civil rights and civic responsibilities. Embracing this pragmatic role offers the Communist Party a chance to survive. Its leaders therefore have good reason to initiate democratic change.

Sure to challenge the Communist Party and stir debate, Democracy in China brings an original and important voice to an issue with far-reaching consequences for China and the world.

Introduction: A Prudential Approach to Democracy
I. The Legitimation Crisis
1. Legitimacy and Performance
2. The Question of Regime Perpetuation
II. The Democratic Challenge
3. The Case for Democracy
4. Democracy and the Self-Protection of Society
5. Contradictions and Arrested Transitions
6. Democratic Preparation
III. The International and Hong Kong Dimensions
7. Democracy at Home and Legitimacy around the World
8. Two Systems, One Democratic Future
Concluding Reflections

The two faces of justice