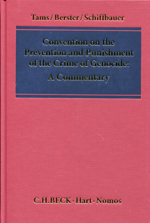 The 1948 UN Convention on the Prevention and Punishment of the Crime of Genocide (Genocide Convention) has a special standing in international law and international politics. For 60 years, the crime of genocide has been recognised as the most horrendous crime in international law, famously designated the 'crime of crimes'. On the occasion of the 60th anniversary of its adoption the UN High Commissioner for Human Rights stated that 'genocide is the ultimate form of discrimination'. In the same context the chief prosecutor of the International Criminal Court described the Genocide Convention as a 'visionary and founding text for the Court'. The Convention has as such influenced the subsequent development of many different areas of international law. For example, the 1951 Advisory Opinion on the Genocide Convention enabled the International Court of Justice to shape the modern regime of reservations to treaties. More recently, the prohibition against genocide has become a crucial pillar of the regime of international criminal law developing since the 1990s, with genocide being one of the core crimes falling under the jurisdiction of the UN ad hoc tribunals, the Extraordinary Chambers in the Courts of Cambodia and the permanent International Criminal Court. In this work the 19 provisions of the Convention are analysed article-by-article, with abundant references to state practice and case law.